Bugfix: 1 hop broadcast distribution is optional for BBMD, From version 3.00, BACRouter force other BBMDs to use 1 hop distribution if cross-network broadcast support is enabled. It’s incorrect behavior and fixed in this version.

BDT editing UI is improved. When submitting, BDT entries will be checked to detect possible misconfigure. The checking is also taken when receiving Write_BDT BVLL message.

If multiple BBMD support is not enabled, when receiving forwarded npdu from BBMD not present in local BDT, the npdu will be dropped and logged. It will help distinguishing configure problem of BBMD on most situation. “Report multiple BBMD” function in last verion is covered by this function, so it’s removed.

Config uploaded from file will be edited in WebUI before saving to eliminate any potential incompatibility.

Ethernet is disabled by default. If BIP and Ethernet are enabled at the same time, a warning of possible circular route will be promoted.

Password for root could be modified from WebUI now.

BIP BVLL header of forwarded npdu is 6 bytes larger than other npdu, so there was potential bug on packet length verification that is fixed on this release.

Supported on all ports(Ethernet, BIP, MSTP).

MSTP packet could be downloaded as “Interval format”. it could be used to show exact idle time before packet by selecting “Seconds Since Previous Captured Pakcet” as “Time Display Format” in Wireshark. It is very helpful to analyze timing and performance problem.

Continuous download is supported. Automatic traffic logging is possible with the API.

MSTP auto addressing feature is removed.  Because the same time online for all devices could not be guaranteed, there is no perfect auto addressing solution. To help determine max_master and unused MAC on bus, “Sniffer mode” may be enabled, then “Current max master” could be obtained from run time info. Unused MAC also could be chosen referred to “Recently active devices”.

MSTP support real time analysis for max master and show it on run time info, if the value is not matched to the setting, “unmatched” is showed after it.

MSTP support sniffer mode. it could analyze and record data without interfering the bus.

The WebUI of MSTP port add options for basic mode and extend mode.

The timeout settings for MSTP are changed from Integer to Float.

Modify feature introduced by version 2.17. “Accept unmatched destination IP” option is provided, if it is selected, only warning message will be logged, else error message will be be logged and the packet will be dropped.

Process 0 in unconfirmed COV notification service is reserved for unsubscribed notificationCOV. Not longer reports error when can not find matched process for 0.

MSTP: Fix bug in standard state machine which would cause passing token to self when duplicated token is found.

Fixed bug introduced from 2.0, it should not wait reply when it send expecting reply request to mac address 255 on MSTP.

Potential bug (barely) may be triggered if MSTP auto mac and baudrate forcing are enabled together.

Support devices utilizing 6.5.3 methods 1 and 4 for establishing the address of a BACnet router for a particular DNET.

When BACRouter startups, it broadcasts out Who_Is_Router_To_Network without network number specified to learn routing info from other routers.

Delay 1 second for sending Network_Number_Is when router startup, because if router is a BIP foreign device, the foreign device registering have not completed yet.

When relay Reject-Message-To-Network with reason 4(Too long), use unicast address instead of broadcast address.

Relax daemon’s max_apdu_retries to 10, in accord with WebUI.

Try to purge invalid route entry if no reply is received for Who_Is_Router_To_Network or Initializing_Routing_Table. This feature helps to rescue from mess network configuration.

Avoid sending too many I_Am_Router_To_Network with circular routing path.

Avoid BBMD broadcast storm. If Forwarded-NPDU is received from broadcast address, do not re-broadcast it.

When relay Reject-Message-To-Network with reason 1/2/4, use broadcast address.

Bug: WebUI BIP mode select should not be applied without submiting.

Save configuration and restart when receive reinitialize-device service request.

Regards device sent Who-Is-Router-To-Network has no route to that network.(Delete that route entry from route table)

Allow setting modification from BACnet side.

BVLL response NAK Upon receipt of a Distribute-Broadcast-To-Network message from a un-registered foreign device. (Addendum 135-2010ad-10)

Change webui reboot to restart, if IP/Netmask/Gateway/DHCP is not changed, fastly restart self

MSTP fast device minimums timeout is set to 0ms (actually 1.5bits plus 50us after turnaround)

MSTP runtime info shows devices is active in past 10 seconds

Requested by some OEM customer, now login authorization domain could be customized when place order.

Bugfix: slave proxy should not response to who-is from port that device is not proxied on.

It’s a big release, many new features and bugfix:

Firmware filename has version and crc.

Bug introduced in 2.1 is fixed: continuous error after communication fail.

When initialize device, if point is forced by high priority, release it.

Firmware filename has version and crc.

A common problem of BACnet MSTP is low bandwidth utilization. Some researches disclose that more than 50% traffic on MSTP bus is token frame.

Unfortunately, many poor implement of MSTP make it worse. For example, in standard, the Tturnaroud is 40 bits, that is said, on 115200bps, node only need to wait 0.35 millisecond to send frame when it receive token. But in practice, there are a lot of devices wait at lease several milliseconds.

Our implement of MSTP try best to improve bandwidth. In previous laboratory test, we achieve 98.8% bandwidth utilization on our BACnet router. The test criterion is:

Update Feb, 2017, We make a stress test for ReadProperty service on above configuration, set max_info_frames to 10 in all devices, 2 devices request, the other 2 devices reply. The result is 153~154 ReadProperty requests are served each second.

Update March,2017. Thank to our detailed runtime info, user could get token pass rate easily. 9 months after we release first firmware, We perform above test again, then get 956.6 per second, 99.6% bandwidth utilization.

Some of customers want to access real time and internal detailed parameter stored in maintenance table.

CCN Gateway for BACnet support BACnet IP, BACnet Ethernet, BACnet MSTP. If you want it work as a router, you should enable more than one BACnet interface, and configure network number. As below: 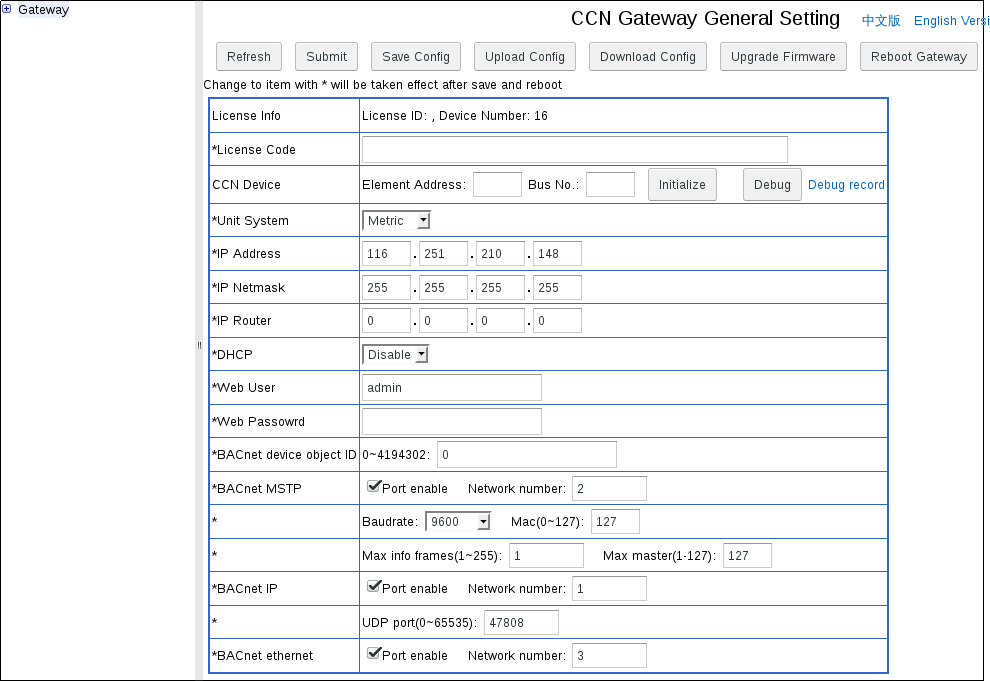 For user to get familar with CCN Gateway, we build up simulated DEMO Gateway.

This demo Gateway link with 6 CCN chillers, each has same bus number of 0, element addreses are from 1 to 6.

The username to acces is:  admin, no passowrd is needed.

For modbus gateway, the acces point is http://demo1.hvacrcontrol.com

User could use modscan or VTS to test the modbus/BACnet function. The port number is defined in the Gateway’s general setting section.

Because the accsss is open, if there are users operate it concurrently. it would behave strangely. If you want exclusively operate it, please contact us, we would give you other private access point.